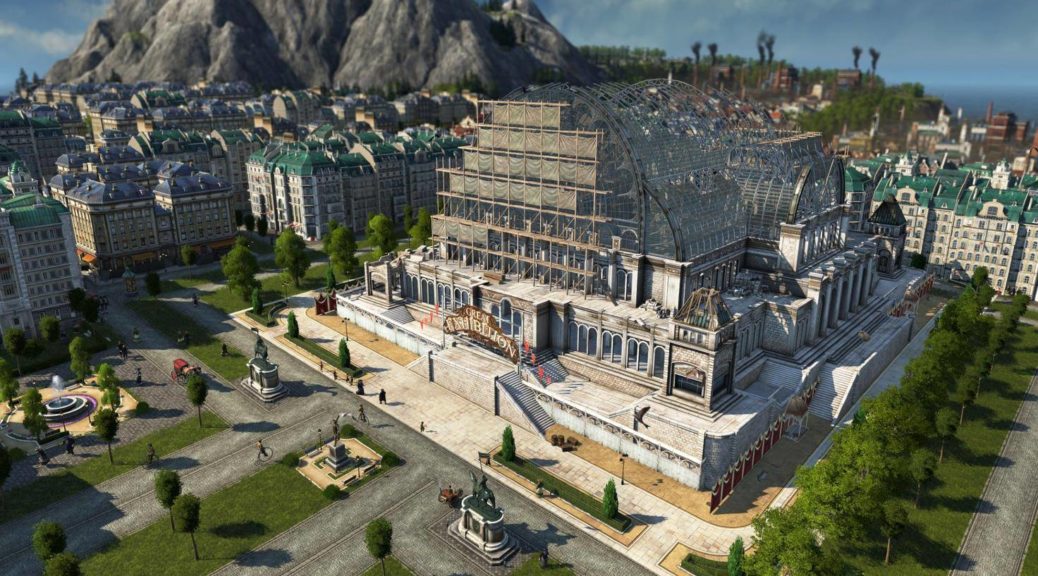 On the 16th of April "Anno 1800" finally appears – after a few shifts. The fans of the traditional strategy series were involved early in the development. As Ubisoft explained, transparency has led to more work, but also to a healthy expectation and a constructive exchange with the players. It's a pity that this is not so common.

Ubisoft invited BlueByte to an exclusive preview event for "Anno 1800" at the noble Nobelhotel on Pariser Platz in Berlin. There, the press was allowed to try the latest part of the traditional strategy series. There are a considerable number of fans who could play the new "Anno" part long before release. Some of the game's features are not only old-fashioned for these players, they have even been co-developed by them.

The Ubisoft studio in Mainz had already started the work on "Anno 1800" the Anno Union, a kind of community platform, whose collected feedback should be directly included in the finished game. Of course, models such as early-access or extended beta phases where player feedback is collected are not new. However, a closed platform where developers and fans exchange and hosted community competitions that even provide content for the final game is far from common.

Instead, there are always big game titles that promise the buyers before the release the blue from the sky and build hype. On the other hand, how the finished product will look like is often kept secret. On the side of the players, meanwhile, the expectations of the game grow. On the basis of small parts of a game, which are accessible in public beta tests, the fans then tinker their opinion about a title together. It is even worse if a pre-release version is called a "demo", which suggests a degree of maturity – as in EAs "Anthem", which is still unfinished months after its release.

Ubisoft, however, seems to want to learn from his own experience: The first "The Division" or "Rainbox Six: Siege" had to fight with their critique. Above all extent and depth of play left initially to be desired. Meanwhile, many updates and subsequent improvements later, both franchises are incredibly successful. The necessary effort could have been reduced if the fans were involved early, if the courage to be transparent had been there.

In the endgame of "Anno 1800" various monuments can be built and extended.

But why are developers and publishers really that hard? In Berlin, I spoke with International Brand Manager Marcel Hatam from the "Anno 1800" team about what transparency meant for the production of the strategy game. I had previously read an interview with Hatam in which he regretted that many players have an unrealistic view of the effort behind the development of a game. Lack of transparency often leads to false expectations of a game and its development process.

When asked, he clarified the problem: Players often assumed that what they see in a beta will appear in the finished game as well. Virtually every department of a studio works on a separate build of the game, since other aspects of the development are not important to them for the time being. Only later will everything be put together – for a beta test, first of all only the parts that are needed to ensure operation.

Organizational factors often come into play when preparing for a beta build – it takes, for example, for gaming platforms such as PSN or Xbox Live to allow a beta build. So while the beta version is still under review, developers are continuing to work on their various builds of the game.

After all, in a beta, the primary concern is to test specific structures or mechanics and to evaluate data. Not to show the players what the game looks like at the time. Exactly why it makes a difference whether it is a preview version of a beta or a demo, the latter just serves the purpose of the demonstration before a possible purchase.

These parts of the series are available:

At "Anno 1800", one set early on a different way of working. On the platform Anno Union the team enters into close communication with the players. Meanwhile, about 300 blog posts from different developers have been posted, about 15,000 gambling comments were received. As a community developer, Sebastian Thun is responsible for ensuring fans' suggestions and concerns are heard by the game makers. After all, this way of working is already a change for the team, most developers are more used to more conventional structures, he reports.

Members of the Anno Union could also participate in art competitions or design ships.

So why is not this done with every game? According to Hatam, this has to do with the fact that many manufacturers have been reluctant to look into the cards. In addition, the development with the community of course also has disadvantages: The process takes longer – the fans give negative feedback on a feature, changes are necessary, which would have otherwise, if anything, carried out only after the release.

In addition, the developers have to take the time to explain their work to the players – such as in a detailed blog post about 3D architecture . The publication of "Anno 1800" has already been postponed twice, but due to the lack of transparency, there has been a great deal of annoyance.

The new game should again become a "real Anno"

The days when blindfolds were used to the players' needs seem to be over at BlueByte. Concretely, for "Anno 1800" this means that the game will be built on three pillars that are geared towards different types of players: The campaign, for which the findings are of particular interest to beginners; the endless game, the home of hardcore fans; and the multiplayer mode including co-op mode.

Many features that have been neglected throughout the series now return to "Anno 1800" thanks to player feedback. Trade routes, pirate attacks, complex AI opponents or ingenious disasters and goods systems make the new part appear again to many fans as a "real Anno". So that the balancing meets exactly the taste of the community, the developers in addition to a closed beta, for example, also focus tests, in which players from the Anno Union the game over several days to try it out and provide detailed feedback.

But every wish can not be fulfilled. At least the understanding of the players for the explanations of the developers to the backgrounds grows, the transparency pays off. Many other current top games could just cut a slice here. I wonder how the finished '' Anno 'of the Fans "will look like in the end.

"Anno 1800" from Ubisoft BlueByte will be released on April 16 exclusively for Windows PCs.