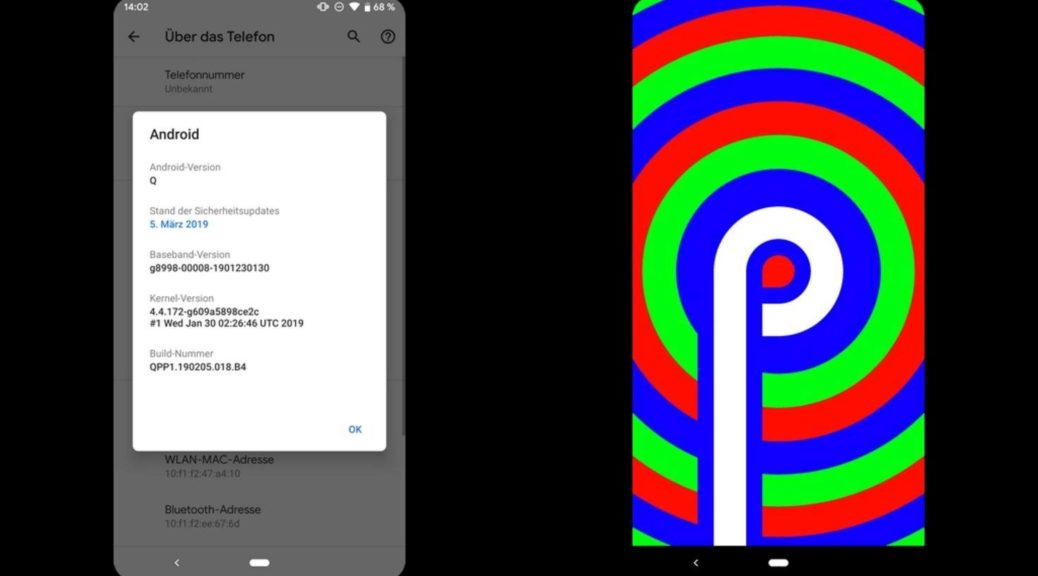 The first beta of Android Q looks almost inconspicuous. On closer inspection, however, reveal a few innovations, of which at least one is even really cool.

Without much notice, Google released the first beta version of Android Q for Pixel smartphones on Wednesday . In contrast to the last few years, where there was initially a multi-week developer beta phase, this time has been eliminated and there was directly the entry into the open test phase.

Obtaining a first impression of a software based on an early beta version is of course always difficult, because a lot can and will change until the release. Still, I want to share my impressions of Android Q at this point to give all Android users out there a first taste of what to expect in the coming months.

Is the update on it? Android Q is inconspicuous

After installing the beta I did not notice anything on my Pixel 2 XL. Everything looks exactly like Android 9.0 Pie. Google did not screw on the interface itself. But that's not necessary from my point of view, after all, the look was only redesigned with the switch from Android 8 to 9 and has since been unsurpassed in terms of design and overview in the smartphone sector.

Only an optional dark mode to save energy was missing so far. This is also in the first beta of Android Q not to be found, but should be included in the final version. Interestingly, by the way, Google has not yet implemented the new logo for Android in the software. If you tap on the "Q" repeatedly under "Settings> Over the phone> Android version", you will still see the logo for Android Pie – a small detail that will surely be fixed in one of the future beta versions.

In short, Android Q looks, at least in the first beta, like Android Pie. A user who does not know that the beta is installed will therefore probably not notice it at first.

The changes that Google introduces with Android Q are therefore primarily under the hood. Above all, they influence how the system works in certain situations and simplify some functions for the user.

Probably the most important changes in the first beta are the changed app permissions. Applications no longer have as many rights to share user data with Android Q. For example, location data may only be shared by an app if it is actually being used. An app that is only active in the background must not permanently send the location of the smartphone and thus the user to servers in the network.

Chrome only shares location data while actively using the app.

This is a small but subtle change, with which Google restricts the massive data gathering power of many apps. This also applies to your own services such as Maps, Chrome or Google Photos.

"Sharing" will be a bit easier …

"Shared joy is double joy" – this saying is of course especially for funny videos on YouTube or a cool tweet and even more with a great photo. With Android Q, Google makes sharing content from within an app easier. If you tap on "Share" via the menu of an app, you will see a subtly revised sharing menu.

If it is a web content that is to be shared, a link to the copy is displayed at the top of the first line. Otherwise, of course, Android still lists the apps and contacts with which the content can be shared.

Most importantly, the sharing menu with Android Q has become much faster and opens up twice as fast as it did under Android Pie. Again, this is a rather subtle improvement, but should pay off in everyday use.

… but sharing wifi is much better

But my personal favorite feature of Android Q is already sharing Wi-Fi access via QR code. If you want to give a friend or acquaintance access to your own Wi-Fi network without having the password ready, you can simply generate a QR code in the menu. These then scan other users and thus automatically receive the access data for the network on their smartphone or tablet. The feature is as simple as it is clever, and will certainly soon be very popular.

By the way, it is also nice that the accent color of the quick settings can now be changed. If this was always blue in Android Pie, the colors "Green", "Purple" and "Black" are also available in the "Developer Settings". This is not spectacular, but certainly a nice feature for the users who have been fed up with the recent blue and would like to have some variety.

The accent color of the quick settings can now be changed.

Other new features of Android Q

So far, the other changes to Android Q are also not very spectacular and have been summarized by my colleague Michael. It seems that Google is so satisfied with the basic functionality of Android that it is all about fine-tuning.

At least for me, this is completely understandable, because in my everyday life I almost never notice any points where I would want a fundamentally different operating system. It's the little details that should be worked out again and again, and the developers are doing this more than ever. If then unexpectedly added a new feature such as sharing the wireless access data via QR code, I'm happy.

It is a pity that the promised system-wide dark fashion is still missing, at least in the first beta. For example, Huawei has been on board since Android 8, so it's really slow for Google.