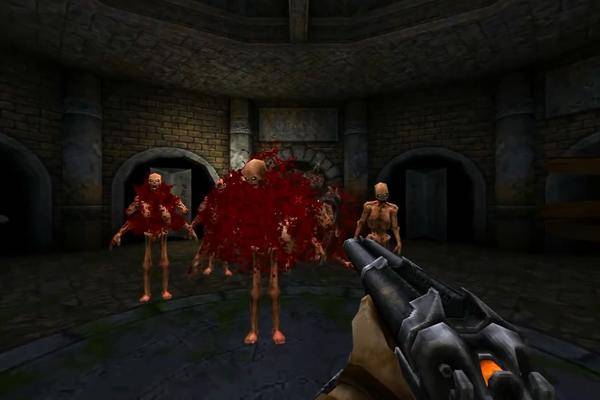 Hach, what were the 90s for a wonderfully tatty decade: The Spice Girls conquered the world, the Internet was still in its infancy and we played fast pixel shooter. "Wrath" takes us back to the last millennium – and runs on the original engine of the classic ball "Quake".

1C Entertainment and 3D Realms have officially announced "Wrath: Aeon of Ruin". The retro shooter will be released in the summer for the PC, implementations on PS4, Xbox One and Switch will follow in the spring of 2020. And as for the retro look, meets "Wrath" already in the black – no wonder, because the game is running the same engine that gave us the gritty first-person shocker "Quake" in 1996.

Everything as before – only better

The makers promise to perfectly portray the feeling of the '90s into the year 2019, but neatly polish up the formula of success of the former simpel shooter. So "Wrath" will have three hubs and whopping 15 contiguous levels that are of course crammed to the last pixel with nasty scary opponents. In return for sending them back to digital hell, we have nine weapons and ten powerful artifacts at our disposal.

Especially pleasing for creative PC owners: "Wrath" will support self-made mods right from the start. The programming tool, which allows you to design your very own levels, weapons and enemies, should be freely available to all players from day one.

Even more ball fun with buddies

And because it makes a good balling with buddies, "Wrath" supports a co-op mode for up to four players via LAN or online. In addition, classic multiplayer modes should be there, with the makers still withhold details here.

Successful games like "Dusk" or "Ion Maiden" show that the time is ripe for a retro-revival of the good old run-and-gun shooters. Let's call "Wrath: Aeon of Ruin" with a hearty "Hell, yeah!" welcome.